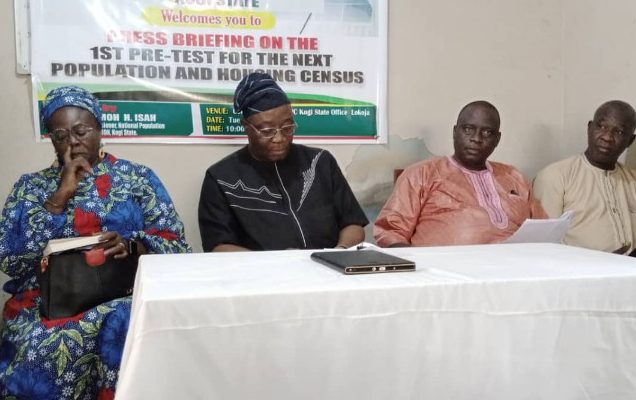 The National Population Commission (NPC) in Kogi on Tuesday began the pre-test exercise in the state as part of its preparations to create good foundation for the next population and housing census in Nigeria.

The NPC’s Federal Commissioner in Kogi, Prof. Jimoh Isah, told journalists at a press conference in Lokoja that the exercise would last for one week in the state.

Isah said that the pre-test exercise was ongoing at selected sample areas in Ogori/Mangogo, Ijumu and Olamaboro local government areas of the state.

He said that the work plan of the commission kick-started with enumeration demarcation in 2015 and now followed by the first stage of pre-test.

”All geared toward ensuring the successful conduct of the actual census that will be credible, reliable and acceptable to the country and other stakeholders.

“The conduct of pre-test which is the stage we are now, is aimed at testing the census methodology, the questionnaires, data processing and tabulation in preparation for the actual census.

”In this pre-test exercise, some selected Enumeration Areas (EAs) in some of the Local Government Areas in States of the federation demarcated between 2016 and 2018 will be utilised, and the census instruments will be deployed to these areas to test run their suitability and readiness for the actual census,” he said.

The federal commissioner said that the exercise would be conducted between June 6 and 13 in all the 36 states of the federation and the FCT.

He, therefore, appealed to the respondents in the selected LGAs and EAs to extend maximum cooperation to the interviewers and answer all questions truthfully.

He assured that all information volunteered would be treated with utmost confidentiality and would not be divulged for any other purpose.

Isah also pleaded with the state government, local government councils, traditional rulers, community leaders and religious leaders to support the commission in the execution of the noble task.

He thanked Gov. Yahaya Bello for his aggressive fight against insecurity which had provided the commission a safe and conducive environment to operate with ease.

He urged the Media not to relent in their constitutional duties of mobilising the general public through adequate publicity and enlightenment on the gains of the first pre-test exercise.