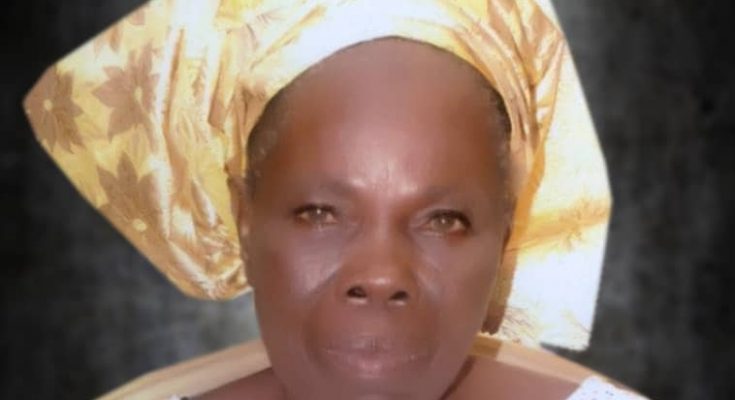 The remains of Deaconess Alice Ajigba Meseoran Amupitan, JP, mother of Joash Ojo Amupitan, a Lawyer, Professor of Law and Senior Advocate of Nigeria, is to be laid to rest on June 19th 2021.

Deaconess Alice Ajigba Meseoran Amupitan died on 20th March, 2021 after a brief illness at the age of 85.

According to Burial Arrangements made available to Newsmen by the son of the deceased, Professor Joash Amupitan SAN and Prince Dayo Akanmode, Chairman of Publicity Committee, explained that Service of Songs holds on Friday 18th June at Baptist Primary School Field, Ayetoro Gbede, in Ijumu Local Government Area of Kogi State beginning at 4:00pm.

Born at an era when women education was an anathema, Mama Alice knew at an early stage the importance of Girl-Education. So she did everything to win the heart of her father Oba Elega Alemede to send her to School. She was therefore fortunate among her peers to be one of the few women of her generation to be educated. She started her education and did Primary 1-4 at Native Authority Community School, Iyah Gbede in 1949-1953 and completed the Primary 5 at Native Authority Community School, Aiyetoro Gbede.

After completing her primary education, she got admission to the elitist R.C.M St Louis Secondary School, Bompai Kano in 1955. Shortly after resuming at the college, her father Oba Elega Alemede passed on and owing to financial difficulty, she could not continue her education at R.C.M St Louis Secondary School, Kano. She however, managed to spend one year at the School having to do part time work with some Europeans in the School including taking care of their cats and dogs in order to sustain herself.

As all work and no play makes Jack a dull man, Alice popularly called “Ajigba Iyah” in her sporting days in the primary schools was always first in relay race.

Mama Alice was employed as a Class Teacher by the then Kabba Native Authority on 1st January, 1960. She worked in many schools traversing major towns in Okun land such as Kabba, Ayetoro Gbede, Aiyegunle Gbede, Iffe Olukotun, Aiyede, Amuro to mention a few, as Class Teacher (Jan 1960-April 1974), Assistant Head Mistress, Head Mistress and District Schools Supervisor in N.A, KDJEC, LEA, LSB, LSMB, OZEB and ILGEA. She was promoted Head Mistress 111, 11 and 1 in May 1974, October 1975 and 1st August 1981 respectively.

Although born to Moslem parents Mama Alice gave her life to Christ and was later baptised in 1953 through the activities of the Headmaster of the Baptist Primary School where she did her early education. She was a Sunday School Teacher at Baptist Church, Aiyegunle Gbede between 1964 and 1967 and it was her erudite Bible Teaching that attracted her to Madam Rachael Oyedele Amupitan (her late mother-in-law who was a leader in the Church) which eventually culminated into marrying her son Late Chief Joseph Benson Amupitan in 1966.

She continued to serve God and was recognised by the Baptist Church which gave her numerous responsibilities – this include W.M.U Secretary for Kwara Baptist Conference (1976—1981), W.M.U Treasurer Ijumu 1 Baptist Association (1987-1992), W.M.U President Ijumu 11 Baptist Association (1993-1998) and W.M.U Treasurer Kogi Baptist Conference (1997-2006). She was an EXCO member of WMU at Baptist Church, Aiyetoro-Gbede until her demise on 20th March 2021. She also served in the Church in various capacities which include:

Coordinator, Igbala and Alafia Society of the Church

Grand Matron, Sunmben (Children and Teenagers in the Church).

Mama went to Jerusalem on holy pilgrimage in January 2012 and was in view of her Christian service honoured outside her denomination as a Deaconess by the Christ Apostolic Church, Masaka, Nasarawa State, on 13th October 2013.

Mama was among the Kogi Conference Pioneer Women Missionary Union officers who have served for ten years in 2006 and were so commended. Among the foot prints on her at the occasion are, “Generous to a Fault”, “A dutiful Woman”, “A Patient Treasurer”, “A devoted Leader”, “A Patient and Honest Treasurer” and “Faithful and Diligent Woman”.

Mama Alice had the honour of been the rally point to her brothers and sisters as well as her extended family and church including their children and grandchildren in the early age such that as at 1975 she had over 13 people who are not her biological children living with her and her husband.

Mama is well known as lady evangelist who supplies Christian literature/books free of charge to and teaches with the WMU of her local church.

Mama is blessed with five children amongst whom are Joash Ojo Amupitan, a Lawyer, Professor of Law and Senior Advocate of Nigeria, Mrs Toyin Victoria Ayeni, a Fellow Chartered Accountant, Mrs Funmilayo Olaniyan, an accountant and a businesswoman, Mrs Yemisi Emonisaiye, an Officer with the Nigerian Custom Service and the last but not the least Mrs Titilayo, an Accountant.

Mama is also blessed with 14 Grandchildren some are within and outside the country. She is survived by her Children, Grand Children, Brothers, Sisters, Uncles and Nephews.