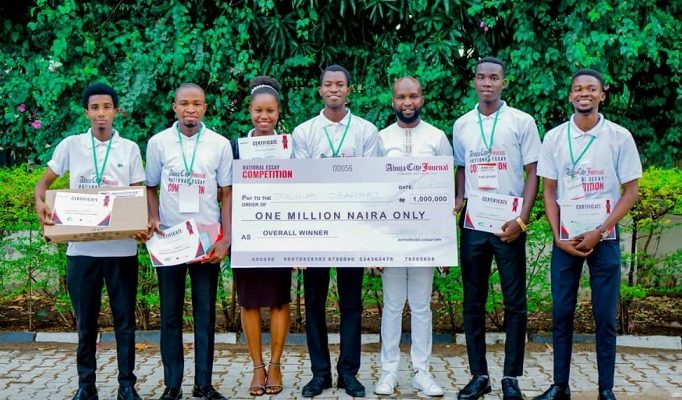 A Kogi-born medical student from the University of Ibadan, Joshua Obarombi has received a cash prize of N1 million in the just concluded National Essay Competition, organized by the Abuja City Journal, an online news platform.

Five other participants who made it to the final stage in the essay competition also went home with N50, 000 cash and other items. They include; Abdulbaki Ahmad from Jigawa State, a student of Electrical Engineering at Kano University of Science and Technology, who was the 1st runner up, Nwankwo Gideon a Teacher from Ebonyi State was the 2nd runner up. Others who went home with consolatory prizes of N50,000 cash are; Isaac Fredrick, Anikwe Ifeanyi and Merciful Nwafor.

Speaking at the event, an Executive Director at Hannibal & Ataturk Co. LTD, publishers of the AbujaCityJournal, Mr. Folusho Ojo said the competition, with the theme; “The Nigerian in the Public Space, to Whom I Can Entrust my Future” was organized by the company as its Corporate Social Responsibility, to stimulate the youths as well as deepening conversation around issues related to leadership challenge in Nigeria.

Ojo also pointed out that the essay competition was initiated to mentor young writers towards using their creative skills to drive the leadership emergence process in Nigeria.

Speaking on the process, he pointed out that the whole thing began last year when about 200 applicants applied and submitted essays to a designated email address and were judged based on different yardsticks.

He gave the criteria to include; Creativity=40%, Structure=20%, Adherence to Topic, Grammar, Length and the Wow Factor = 10% each, which in all bring total assessment score to 100%.

He pointed out further that after the first stage, 10 participants were shortlisted, from which six emerged and were consequently rewarded after taking part in another stage of the competition which was physically supervised by the organisers at the Abuja corporate headquarters of the company.

The theme of the second stage was; “Solution to the Nations National Security Challenges” coordinated by Miss Amanda George, which was also designed to test the participants’ creative prowess and writing skills. As part of the activities lined up to make the event memorable, the winners also had the opportunity of taking part in a tour of Abuja on the eve of the prize giving day.

The exercise allowed them to visit many iconic places in and around the FCT. Some of the places visited are; the popular ‘Human Face Rock’ and the symbol on Nigeria’s One Hundred Naira Note, otherwise known as Zuma Rock, ECOWAS Headquarter, Eagles Square, Abuja National Mosque, National Ecumenical Centre and National Assembly. Others places visited are; Central Bank of Nigeria, NTA Headquarter, Radio House, International Conference Centre Abuja, Nigeria Army College.

According to the Tour Guide, Mr Salihu Mohammed, the decision to take the finalists round the Abuja City gave them the opportunity to see and feel Abuja.

He said: “Beyond the prize that went with the competition, the tour aspect served many purposes. It was an avenue for the winners to be familiar with basic unique things about the FCT. At the end, they all expressed surprises at what they saw and expressed appreciation towards the organisers.”

Earlier, Mr. Foluso Ojo had described the winners as “outstanding writers”, pointing out that the six winners would henceforth become the ambassadors, being the pioneer contestants. He also added that they (the ambassadors) would be around during the 2nd of the competition to encourage new participants.

While disclosing that over 1200 essays were received across the six geo-political zones of the Federation, he stated that the essays were collated by the team and handed over to the adjudicators, who vetted and awarded marks accordingly.

Also speaking at the event, the Senior Special Adviser to President Muhammadu Buhari on Political Matters, Senator Babafemi Ojudu who was the Special Guest of Honour at the event, encouraged the participants to see the competition as a platform to stimulate and prepare Nigerian youths for leadership.

Ojudu added that, youths through the essay competition have joined the conversation in the discussion to shape the future they want for themselves. He also stated that it has afforded the youth a platform to articulate their observation on the current situation in the country in the bid to proffer viable solutions.

Senator Ojodu also challenged Nigerian women to get involved in leadership and politics, admitting that women are better administrators. He offered free mentorship to all the participants and encouraged them to continue in networking for a better future.

He commended all the participants for their great courage and faith in the essay competition. “Having reached this stage and used your writing skills to set a goal for Nigeria and Nigerians, I hope this will lead to a continuous training, mentoring and employment of the Nigeria youths,” Ojudu added.

Previous PostHike in Price of Food Items: Where is the Hope of the Common Man? Next PostRamadan: Ex-Rep Member Distributes Food Items to Muslims, Commends Kogi Governor