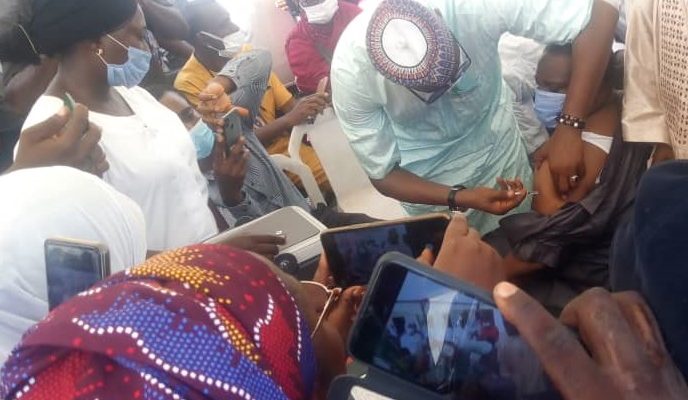 The Kogi State Government has commenced the administration of the Oxford-AstraZeneca vaccine in the state with priority giving to health workers and frontline essential non health workers.

The News Agency of Nigeria (NAN) reports that Kogi Government on Monday night took delivery of about 16, 900 doses of the Oxford AstraZeneca vaccine.

NAN reports that the flag off was followed by the administration of the vaccines on Dr. Abubakar Yakubu, KSPHCDA Executive Director, who volunteered himself as first person to take the vaccine, followed by the CMD Kogi Hospital Management Board, Dr Usman Zakari and  some medical officers.

In his remarks, the Commissioner called on the people of the state to volunteer themselves to take the AstraZeneca vaccine, saying nobody would be deprived or forced to receive it.

“I want to clarify that nobody is exempted or will be deprived from this exercise, also nobody will be subjected to force vaccination exercise in Kogi State,” Audu said.

He said that the way Governor had handle the COVID-19 issue in Kogi, ”is about a leader who does not want to deprive his people of an intervention that may be potentially beneficial to the people.

“At the same time, the governor wanted to avoid exposing his people to a new intervention that may be potentially harmful to the people; that is the position His Excellency has acted.”

He, therefore, appreciated to Gov. Yahaya Bello, for taking proactive measures and for making sure that the vaccines was finally deployed to Kogi at the nick of time to cater for the health needs  of its  citizens.

The Commissioner disclosed that the ministry had taken delivery of 16, 900 out of the total 33, 000 doses of the Oxford Astra Zeneca vaccine to be deployed to Kogi State.

He noted that the remaining balance of 16, 100 doses of the vaccines would be deployed to Kogi in the next two weeks.

He assured that the vaccine was safe, but reiterated that the nobody would be forced to take it or deprived from taking it.

Also speaking, Dr Abubakar Yakubu, the Executive Director, KSPHCDA, said the vaccine had passed through series of laboratory tests by WHO, NAFDAC and other relevant agencies, saying, ‘:the vaccine is virile and safe for the people of the state”.

He urged Kogi citizens to dismissed the claims in some quarters that the vaccine was not safe, stressing that the state Governor would never approve any drug that would pose danger to the health of his people.

In his remarks, the State Chairman of Christians Association of Nigeria (CAN), Dr John Ibenu, commended Kogi Government for its pragmatic approach in managing the COVID-19 pandemic effectively from the onset.

“The COVID-19 vaccine is safe; there is no trick in it; please let us take it to boost our health immunity against the virus.”

On his part, the Kogi Chairman of Jamaatu Nasiru Islam (JNI), Amb. Usman Bello, appealed to Kogi people not to allow themselves to be deceived against the genuinety of the vaccine.

He assured that his organisation would intensity its effort in sensitizing Kogi residents to come out for vaccination against covid-19 pandemic.

On his part the Kogi Chairman of Nigerian Medical Association (NMA), Dr Omakoji Oyinguh, urged the medical doctors to make themselves available for the vaccination.

He assured of NMA support for the State Government, adding that as front line workers, the wellness of its members and other health workers remained a priority to the government.

The State’s Chairman of People Living With Disability (PLWD), Mr Ibrahim Arome, thanked the state government for making the vaccine available for people who desired to be vaccinated.

Arome assured that his association would extend the vaccination campaign to all the communities where disable people live to fully participate in the vaccination exercise.

Meanwhile, the Commissioner immediately after the flag-off, inaugurated a Health Research Team comprised of selected scientists and other health personnel.

He noted that the team would carry out research on some few areas of attention regarding the COVID-19; to investigate any adverse effect and reasons with scientific explanations behind the relative sparing of Kogi State by the virus.

Previous PostDangote Retrains Drivers to Curb Road Crashes Next PostEventful and Purposeful One Year of Leadership as Rector, Kogi State Polytechnic; So Far, So Good