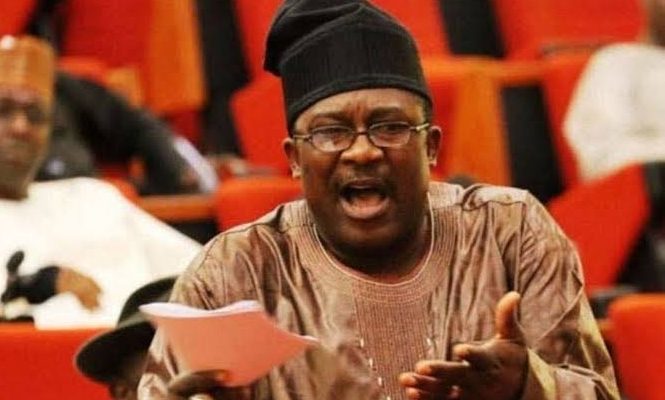 The attention of Lokoja Progressive Association (LPA) has been drawn to a rejoinder which was published in some social media platforms with the caption’ Sen. Smart Adeyemi’s recall, politics going dirty!!

The LPA would have ignored the flawed reply it due to the fact that the said rejoinder was not signed,but in other to put the record straight, we have no other option that to reply.

In his replied ,the writer was quoted as saying that; “It is highly unfortunate that the said group that claimed to be apolitical from clear indications are political, paid data boys paid from the opposition to come and destroyed the ruling. whose aimed is to blackmail the Senator ahead of 2023.”

We want to remind Senator Smart Adeyemi that in 2019 the same association (LPA), didn’t only campaigned for his election, but pleaded on his behalf.

You recalled that Lokoja elites rejected your candidacy due to your stand against the establishment of Federal University Lokoja,it was Lokoja Progressive Association ( LPA),you ran to cap in hand and requested them to intervene,this we did. A meeting was scheduled at Omega Hotel Lokoja, we have the record of attendance for the meeting and the outcome still in our possession.

How can Senator Smart Adeyemi denied LPA now, when he was a beneficiary of it contributions towards his success in 2019?

The association is not surprised when you classified them as “paid data boys, that were paid from the opposition to come and destroy the ruling. whose aimed is to blackmail the Senator ahead of 2023.”

We want to make it clear that the LPA has every constitutional rights to challenge your decimal performances and no amount of blackmail or name calling can stop us.

On the issue of 2023, Senator Adeyemi need to know that the future belongs to Almighty God and HE will not allow people like Senator Smart Adeyemi to attain to any elective position.

You also alleged that while your senator is been celebrated, some “mischievous, blackmailers and dishonest set of association choose to go blind.”

We challenge you to mention one single achievement recorded either in Kogi West,in general and Lokoja in particular since Senator Smart Adeyemi assumed office. Can smart Adeyemi mention one single Lokoja Local Goverment indigene he employed as his aide,how many people among the teaming youths from Lokoja that worked tirelessly in returning him to the Senate did he engaged from Lokoja Local Goverment?

As we stated earlier in our press statement which was published in some national dailies,that Senator Dino Melaye’s’ unblemished records of achievements were glaring at the doorsteps of the good people of kogi West Senatorial district,with particular reference to Lokoja Local Goverment area, Senator smart Adeyemi his predecessor has nothing to show rather than deceitful and political gimmick.

What we stated was not meant to blackmailed Adeyemi as he claimed,but a fact that is glaring across the entire seven local governments that constituted Kogi West Senatorial district.

That adeyami is arguably one of the outstanding Senator in National Assembly is nothing but a mockery of democracy and abused of good representation.

We of the Lokoja Progressive Association (LPA) challenge senator Smart Adeyemi to publish all that “he gave back to his constituency and what he has “extremely” done in terms of physical projects in Lokoja Local Government area. We challenge senator Adeyemi to visit Lokoja and invite stakeholders to know whether what he alleged about viable projects is true.

The people of Lokoja Local Government are more enlighten now than ever and no amount of political propaganda of any kind would deter them from fighting for their constitutional rights.

How can a Senator of Federal Republic of Nigeria include sharing of 3kg bag of rice as an achievement? And even the 3kg bags was shared to Smart Adeyemi Political Vanguard!

We are all living witnesses to the palliatives shared by the Honorable Minister of State for FCT, Dr Ramatu Tijjani Aliyu during the holy month of Ramadan even though she was not elected!

“That the senator is accepted by most of his people that was one of the key reasons why he made a record breaking of margins in the last poll” And he still continued to tell the people of his constituents how he spent million of Naira in tribunal?

What happened in Kogi during the 2019 elections still remain fresh in the memories of Nigerians, including how senator Dino Melaye defeated our distinguished senator in Ijumu local government.

We want to make it clear that Lokoja Progressive Association (LPA) is not sponsored by any opposition as alleged, we are doing this based on our patriotic zeal and concern for our people and no amount of blackmail or intimidation would deter us from this noble cause.

In conclusion, we want to assure the people of Lokoja Local Government area, that the LPA would continued to work with other stakeholders in ensuring that no failed politician would be elected at all level come 2023.